By Nina MilliganJuly 26, 2018Connections
No Comments 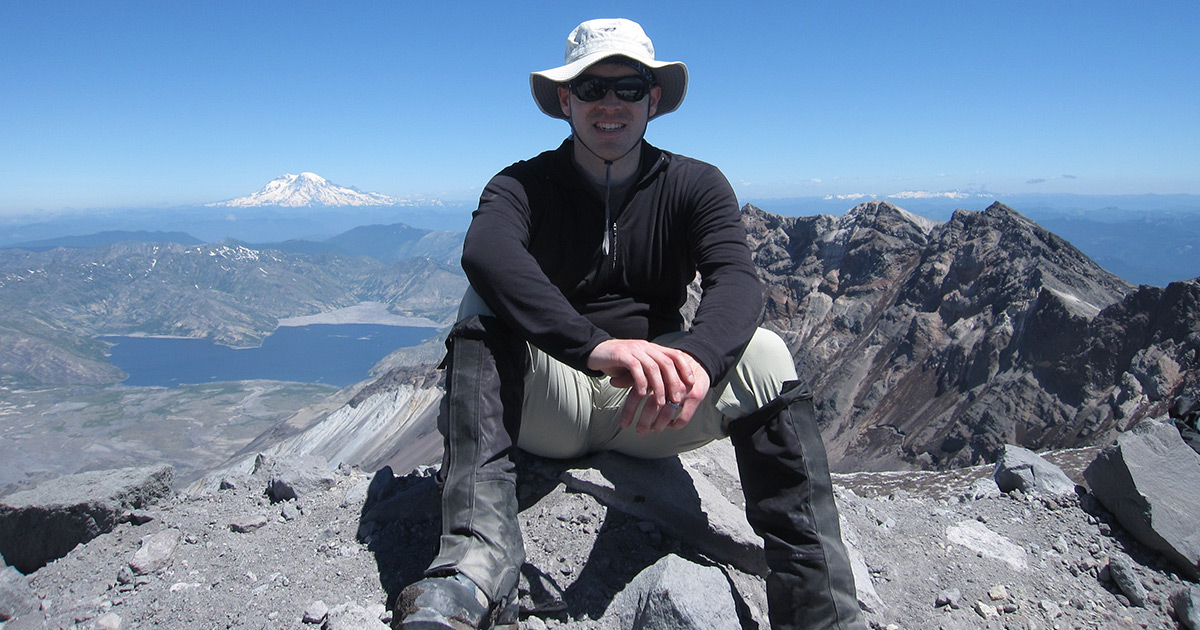 When Highlands Council learned that Issaquah Highlands resident, Tim Underwood, recently completed climbing all five of our state’s volcano summits, we just had to know more.

Tim and his family have lived in the Highlands since 2004. Tim is a software engineer and co-founder of the company, Eluvio, which rents office space in Blakely Hall. His dog is a friendly fixture at Blakely Hall, a six-year-old Shih Tzu Bichon mix named Murphy. Tim lives with his wife, Molly, their four-year-old daughter, Nora, and their son, Evan, almost two-years-old in Magnolia Park.

Nina Milligan: Why hike all of Washington’s volcanic summits?

NM: When and how do you train for such strenuous endeavors?

TU: I try to get out hiking, climbing, or trail running several times per week. Tiger Mountain is one of my favorite places to train because it is so close. You can usually find me heading up the Cable Line trail to the West Tiger peaks or trail running the Tradition Plateau trail or the main West Tiger 3 trail.

I also join fellow climbers every Wednesday night after work to hit up one of the I-90 peaks (e.g. Mount Si, Mount Teneriffe, Granite Mountain, etc.).

NM: What do you like the best about mountain climbing?

TU: I love being out in the mountains and I love the physical challenge.

NM: What do you like least about hiking mountain summits?

TU: Weather turning bad makes climbs less fun. When I climbed Glacier Peak we originally had a sunny forecast but on summit day we woke up to heavy rain and wind, which made for a very wet and cold climb. Also, too many people on popular climbing routes can cause problems by creating bottlenecks. The most recent time I climbed Mount Rainier on the Disappointment Cleaver (DC) route we got stuck for about two hours at the top of the cleaver waiting for all of the teams in front of us to cross over a crevasse. Many teams were turning around due to the long wait time, and because it gets very cold standing around, doing nothing on a mountain!

NM: What’s next in your hiking ambitions?

TU: I have a long list! There are many great non-volcanic peaks in Washington that I would like to climb (e.g. Mount Olympus, Mount Stuart, etc.) as well volcanic peaks in Oregon (Mount Hood) and California (Mount Shasta).  And at some point, I might start tackling some of the Seven Summits (Aconcagua, Denali, Kilimanjaro, etc.).

Photo: Issaquah Highlands resident, Tim Underwood, completed his goal this spring of hiking all of Washington’s volcanic summits. He ranked what he thinks is the easiest to the most difficult to climb: Mt. St. Helens (pictured above), Mt. Adams, Glacier Peak, Mt. Baker, Mount Rainier (which he has summited three times).

As published in July 2018 Connections