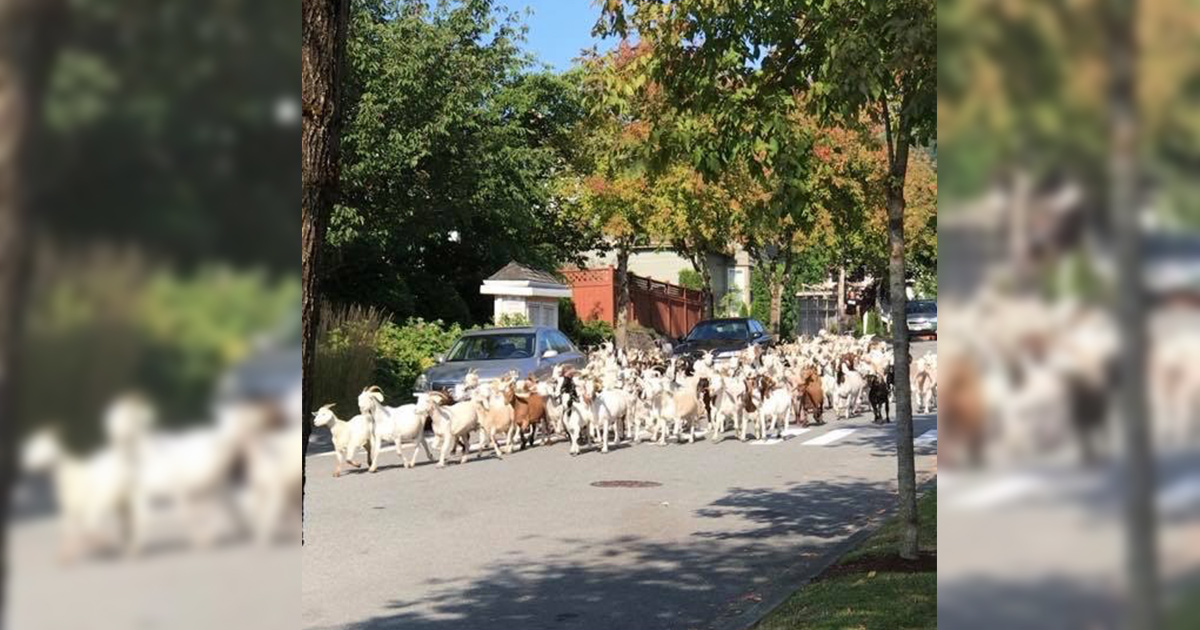 On July 30 residents were enjoying a quiet, sunny evening in Issaquah Highlands. Some were strolling, some out for a jog, walking the dog, or taking the kids to the playground. Visiting with neighbors on the street corner is a common past-time here. But a little before 6:00pm everything changed in the Mulberry and Kirk Park neighborhoods. That’s when the goats got out!

More than 100 goats were spotted running down Mulberry Street in Issaquah Highlands at about 5:45pm. Gigi the shepherd dog was chasing them, doing her job. They ran down the middle of the street and spread out along the sidewalks, bleating and jostling around.

Neighbors kicked into gear and jumped into action. Some kept the goats away from poisonous plants (such as rhododendrons), while others had their hands full just trying to keep the herd together. Young and old, men and women, flapped their arms, ran back and forth, and tried verbal pleas to keep the easily distracted goats from wandering off whenever a tasty plant caught their eye.

When shepherd Craig Madsen, co-owner of Healing Hooves Natural Vegetation Management, got into a controlling position, the goats followed him, with Gigi and Issaquah Highlands neighbors bringing up the rear. Craig led them straight to the small dog section of Bark Park on Natalie Way, where he could securely corral them.

How did they get out?

Sue Lani Madsen, wife of Craig and co-owner of Healing Hooves, provided the most likely explanation via Facebook:

“They were nearing the end of their time in that particular pen and ate all their favorite stuff yesterday. They can be as single minded as human kids who don’t want to finish their plates. Most likely there was jostling for position and one bumped into/knocked over a post and they saw an opportunity to make a break for it. Goats being goats.”

Facebook provided a lively forum for resident photos and updates of goat sightings. Clever hashtags bantered about such as #goatsgonewild and #greatgoatescape.

Resident Dmitriy Kot not only got video footage of the goats racing down Mulberry Street in their escape (first video below), but he was also there as the goats dutifully followed Craig down the community trail (second video below), away from the Vista Community Garden and straight to the fenced corrals of Bark Park.


Sue Lani, who was back home on the ranch near Spokane, tracked the event and addressed the community via Facebook:

We apologize for any inconvenience as Craig and Nessie work to round up Gigi and the herd this evening. They’ve been behaving themselves so well all summer. They’ll all be heading home tomorrow or Thursday.

Please do let us know if you spot a stray group by posting below and I will text it to Craig. I’ll update this post whenever I have new information back on the status of the roundup.

The story unfolded on Facebook as residents chimed in with sightings, updates and well-wishes for the goats and the dogs.

Deanna Fischer was an early poster:

“The goats have escaped and are running loose who do we call??????”

“Goatbusters” was the most popular reply. (Official community media chimed in with the goat herders cell number, too.)

Deanna was one of several community members who jumped into action, updating the community and answering questions about the goats and their great escape.

“When you have goats and Gigi running past your garage and no one else is around you’ve got to think quickly! ?”

Deanna continued, “I was super impressed with how fast this neighborhood came together to solve a problem!! We did well highlands and the internet for communication helped too.” 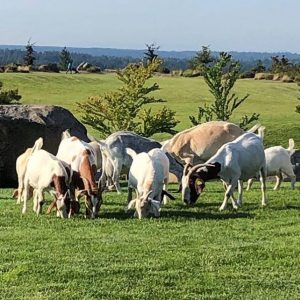 “It was fun to see them,” Amber Bates said. “They are so cute and such funny creatures. I love their beards. Rebel goats taking over the highlands. ? love it.  Metaphysically goats are a symbol of faith, independence and learning how to be a “kid” again. Also new beginnings and blessings.”

“Thanks goats ? for adding some fun today in the highlands.”

At 7:21pm, Sue Lani reported that Craig “called briefly to let me know he has most of them corralled in the Bark Park, Now it’s a matter of finding any small groups that may have split off after a tasty bush. Craig and Nessie the border collie looking for stragglers.”

“Thanks for this post! I saw this and a bunch of us helped Craig get them back,” Susan Harmon Lohman reported. “He is still out trying to round up the rest!”

Residents enjoyed being helpful and supportive of our summer visitors. Goat herds have worked in Issaquah Highlands every summer for over 10 years. They mow and trim the vegetation on our steep slope open spaces, spaces that are too steep for a mowing machine. While they control the vegetation, they also fertilize the soil, providing two benefits in one! Issaquah Highlands is famous for hiring this eco-friendly crew to help in our landscape management. *

With an update at 9:09pm, Sue Lani reported, “The herd loaded readily into their familiar trailer at the Bark Park and are back in their last pen of the season, the one they were supposed to move into in the morning. Gigi is back on guard duty, and Nessie is happy she got to work today. Craig is reloading his equipment on the truck and thinking about dinner. Thursday morning they’ll be loading up and heading back to the ranch for a two-week break.”

“Thank you for your help for my husband,” Sue Lani again expressing her gratitude. “It’s a helpless feeling to be at home and not be there myself.”

“Tell him we love his goats and not to worry.”

Others chimed in throughout community Facebook pages with support. Magaly Hernandez Merkel said,

“I’m happy to have been part of the goat ? roundups with great neighbors!!!!”

Also from Sue Lani, “We so appreciate our Issaquah Highlands neighbors with a sense of humor and adventure who understand that managing landscapes with goats involves, well, goats! Critters with a will of their own, a knack for mischief, and also a part of recycling organic matter and carbon back into the soil.”

With the help of the Issaquah Highlands Community Association (IHCA), the goats were all rounded up in Bark Park and then moved by trailer to their final Issaquah Highlands assignment, the greenbelt behind Mulberry Street. They go home to the ranch tomorrow for a two-week vacation.

*See 2010 http://www.cc.com/video-clips/jvi6id/the-colbert-report-people-who-are-destroying-america—landscaping-goats  when Tammy the goat lady began bringing goats to the Highlands and Russ Ayers was our landscape manager. Parental Review: This is a saucy, late-night comedy story – beware.

All quotes and media were used with user permission for this post.

“The Great Goat Escape of 2019” made local and national news. Here are links to some of those stories:

“200 goats escaped into the streets of Issaquah” The Issaquah Reporter

“After escaping an enclosure, dozens of goats get loose and run through a neighborhood in Washington state” CNN.com 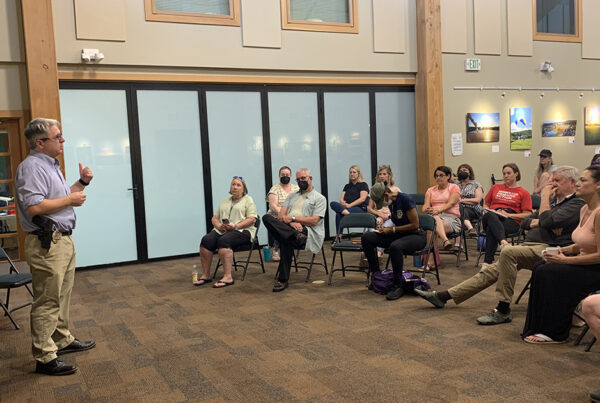 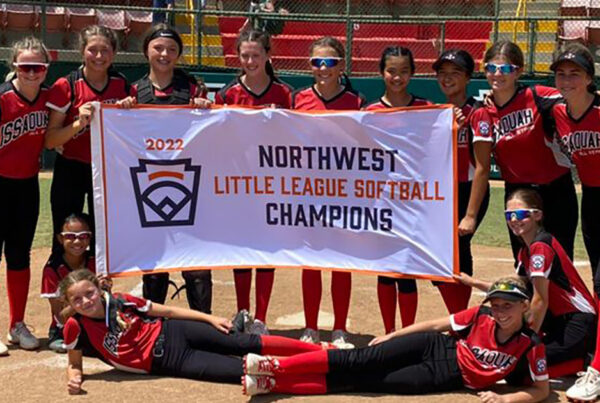