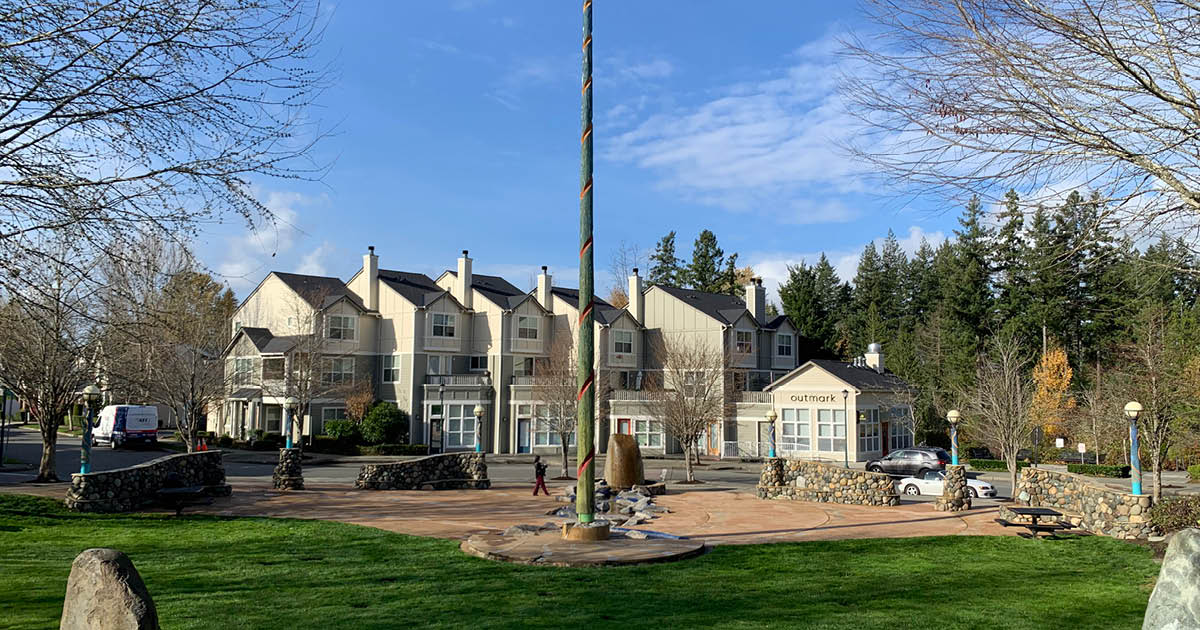 This story is part of our “Art in the Wild” series on Issaquah Highlands’ public art. Learn more in Spring 2022 Connections.

Milenko Matanovic’s legacy is not only embedded in the founding principles of the Issaquah Highlands community, but also in some of its most iconic images.

Milenko grew up in Slovenia, where he was a founding member of the Slovene neo-avant-garde movement OHO – a collaboration of visual artists, writers, filmmakers, musicians, and theorists. According to Milenko, in Slovenia, the concepts of placemaking and wayfinding are second nature. He was surprised this was not the case in the U.S.

“In my audacity, I said I would try to do something about that,” Milenko said.

Using his European background and passion for participatory democracy, Milenko made a career in bringing people together to create gathering places and community spaces, amounting to over 60 projects. This was part of his work at the Issaquah-based Pomegranate Center, a nonprofit he founded in 1986 with “the intention of linking art with community betterment.” The center closed in 2020.

“Our model was to involve community members from initial design to construction to eventual programming and stewardship,” Milenko wrote on his website.

In the 1990s, Judd Kirk, then CEO of Port Blakely Communities, the Issaquah Highlands master developer, asked Milenko to consult on his newest project, building a unique urban village in the foothills of the Cascades, now Issaquah Highlands. Milenko helped create the community’s guiding principles based on sustainability, walkability, community, and economic vitality. He wanted to send a message that this community was different from traditional suburban development. 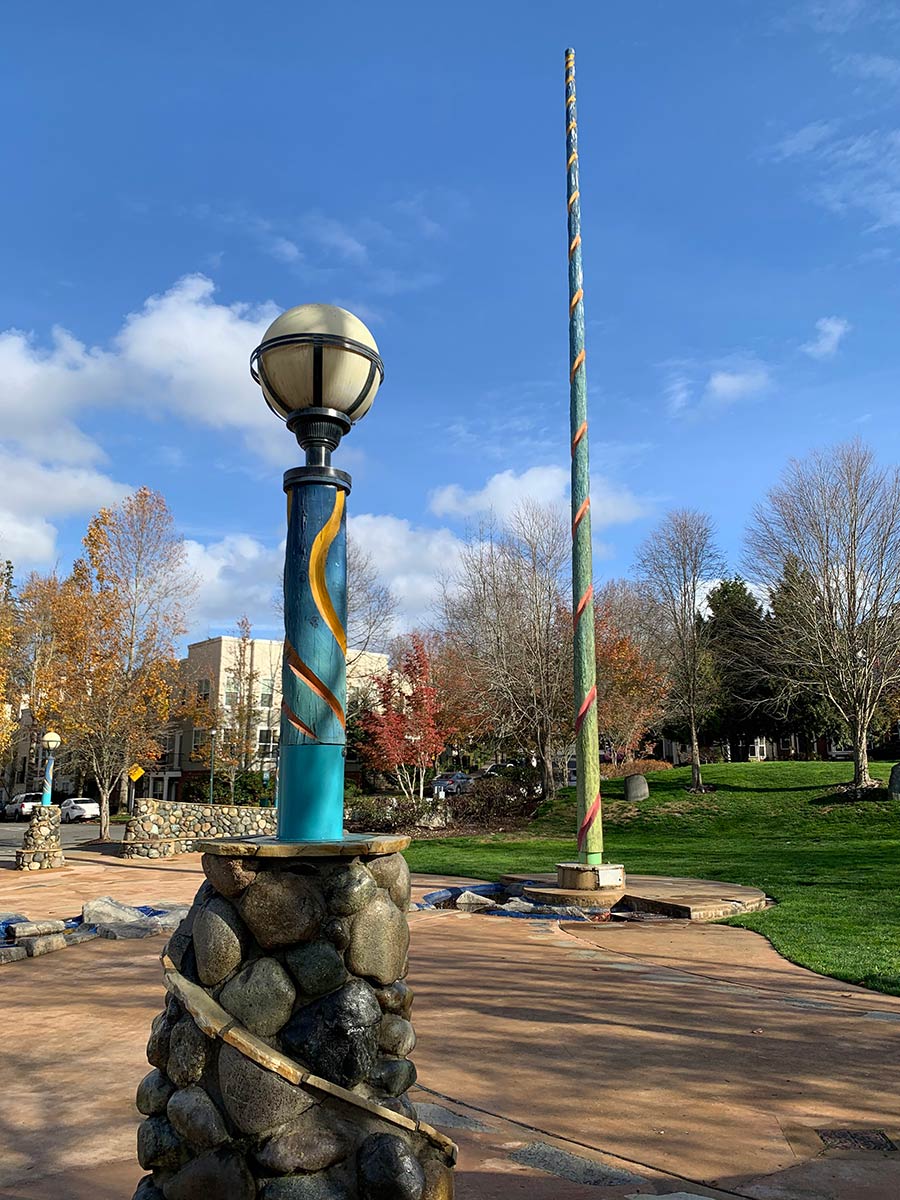 Many of the materials used in Ashland Park are local or reclaimed, including the boulders and stones that came from local construction sites.

Port Blakely then invited Milenko to design Issaquah Highlands’ first park, Ashland Park, which opened in 1996. Inspired by a sense of place, Milenko wanted to create a park with a local character and was intrigued by the idea of including handmade features as opposed to standard catalog purchases.

Many of the materials used in the park are local or reclaimed. Milenko incorporated a carved 65-foot cedar totem pole to “celebrate” the focal point of the park where four surrounding roads converged. Surrounding boulders and stones in the seating walls were recovered from the park itself or nearby construction sites. The park also includes a unique fountain and carved light posts. A grassy hillside provides a natural amphitheater to admire the park’s aesthetic and promote community gatherings.

The natural materials used in Ashland Park do require more regular maintenance. The Issaquah Highlands Community Association (IHCA) and the Pomegranate Center organized a community project to refurbish the totem pole in 2016. 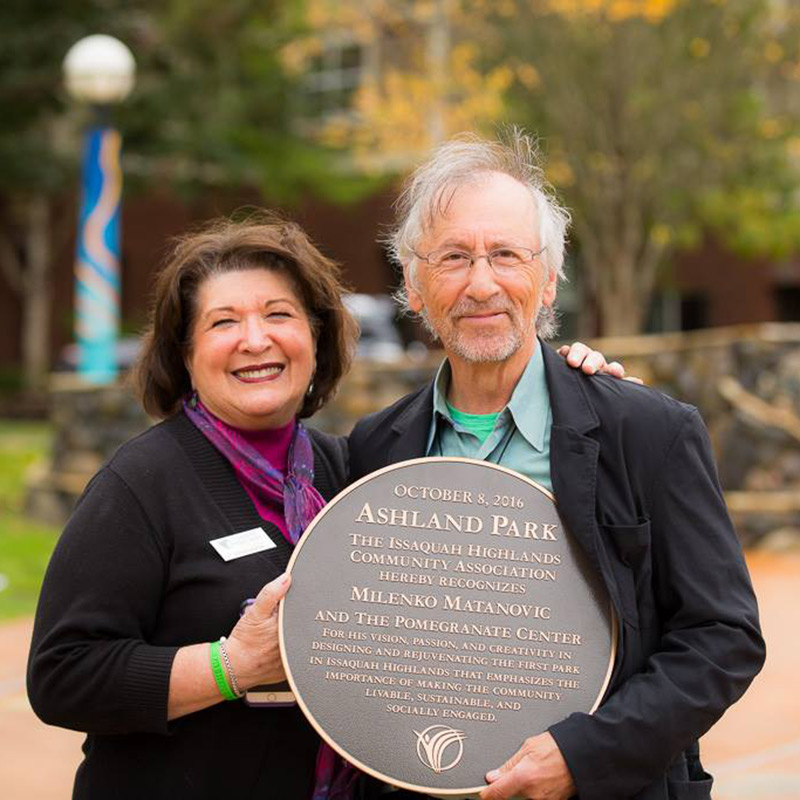 Milenko Matanovic (left) with former IHCA senior community manager, Erika North at the 2016 rededication of Ashland Park. At that ceremony, the IHCA presented Milenko with a plaque to be placed inside the park. The plaque reads: “The Issaquah Highlands Community Association hereby recognizes Milenko Matanovic and the Pomegranate Center for his vision, passion, and creativity in designing and rejuvenating the first park in Issaquah Highlands that emphasizes the importance of making the community livable, sustainable, and socially engaged.”

According to Milenko, the neighborhood’s design was not always an easy sell as residents were asked to trade large backyards for a shared common space. Milenko remembers hearing comments the neighborhood would be “too dense, too different, too European.” According to Milenko, Ashland Park is an example that density can work when the land is used effectively; sprawl is counterproductive to the future.

“The neighborhood around Ashland Park is a metaphor for some slice of the future,” Milenko said.

Milenko admittedly has mixed feelings about public art. He designed Ashland Park to be art as a place rather than as an object. He describes public art as having “different levels.” While he started as an artist creating objects, Milenko believes the harder work is creating something that rises out of a particular space, rather than using the space to feature objects.

In Milenko’s opinion, some public art is a distraction or “sugar on top of a cake,” like the steel cloud-like sculptures he designed for the water tower on Northeast Park Drive, originally designed to improve the view of the homes across the street. He feels developers should focus more on art at the start of projects rather than adding objects at the end to make “something that is not pretty prettier.”

“I would prefer we don’t make ugly neighborhoods,” Milenko said. “We should be doing these things right in the first place.”

Vicki Grunewald is the Highlands Council media editor and a Harrison Street resident. 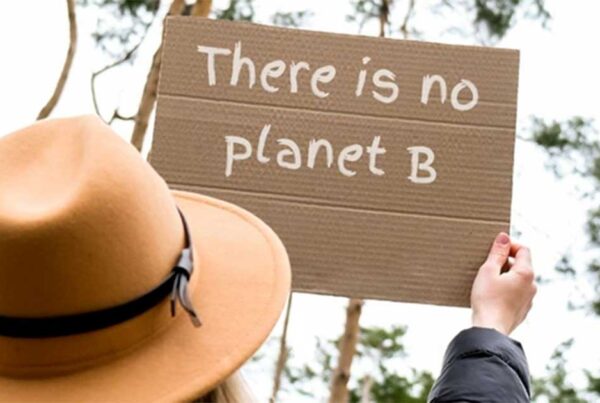