<Editor’s Note: Since last year, when Josh was just a Junior at Issaquah High School, he contributes monthly cutting edge, humorous media reviews for Connections with Issaquah Highlanders in mind. When he told me about his trip to China with his father last summer, I discovered another side of this writer that I wanted to share with our community. His story seems like many others in our community, a family straddling family relations across the globe. An edited shorter version of this story ran in October Connections. Here is Josh’s full story.>

After the death of my paternal grandfather, a portion of the family’s apartment in Kunming, China fell to the next eldest male member of our family, my father. Now, this presented several problems, for not only did my dad live with me in Issaquah, his mother had just moved out of the apartment in question to stay with my younger aunt. As the apartment was still worth a sum of money, my father agreed to work out a better distribution of ownership with my aunts.

Chinese bureaucracy required that the notarized signature or authorization had to be done within the borders of the People’s Republic of China. So it came that my father and I flew to Kunming to settle an inheritance dispute and, of course, to see my grandmother and other extended family. Easier said than done, as a notarized and approved letter of invitation was required for a visa to be issued, several months ahead of time. The visa itself was good for one trip of a hundred and twenty days, within the span of ten years; pretty loose considering the tightening restrictions on international travel. 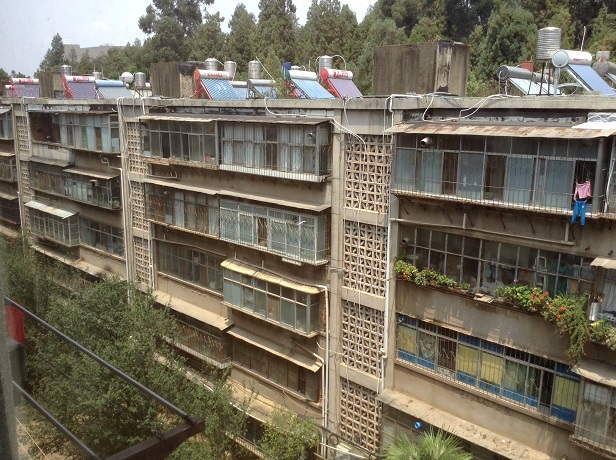 The view out the window of my apartment, on the outskirts of the city

In the part of Kunming where we stayed, run-down apartment buildings clustered close together. Wires reach across the barely-paved, thin, meandering streets. The East Asian urban style is perhaps as “anime” as it gets; the city itself could have been a setting for any Japanese cartoon. Grandparents usually remain at home and spend their time preparing food, a day-long affair, while the parents work and the children go to school. In the morning, Grandparents shop the neighborhood small farmer’s stalls in the streets and (very filthy) alleyways to pick up fresh produce, which is then prepared, slowly, for breakfast, lunch, and dinner. The stalls display produce laid on the ground in crates and a scale. Some carry cooking oil or common spices and condiments, but little else. The Wal-Mart is also dirty and messy and the stores that are cleaner have stale or poorer quality produce.

Looking out across the city, every rooftop is covered with solar powered water heaters or just plain solar panels, likely because many of the apartment buildings are quite old. While the older parts of the city are run-down and can hardly be described by anything other than the word squalid, the newer parts are cleaner and more modern, especially the shopping centers, filled with so many unfamiliar brand-names they all begin to blend together. 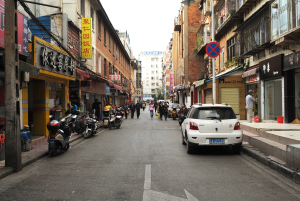 One of the better alleys in Kunming

While I can’t read or write, I can speak and understand Chinese well; my parents have always spoken the Beijing dialect of Mandarin, which is probably the most accent-neutral version and what the national news anchors speak, much like how we talk in Seattle. There is, a different accent in the southern Yunnan Province, much like our Southern drawl, with vowels empathized and words mispronounced. However, unlike our Southern accents, the Chinese dialect difference is pronounced enough that it isn’t easy to hold a conversation. Far different from our news anchors and the Boston or Southern accents.

The laws of inheritance in China show preference to elders: if a deceased has no will, the estate is split equally between their descendants and their parents. There is no such thing as a secret will, probably making Inception pretty confusing when it aired in China. But one can settle their inheritance before their death, which is what my grandmother set out to do. Despite their indulgence, I could still see that my aunts had similar desires. My father had been dragged all the way out there to play mediator, as eldest son and head of the family. I’ll spare the details, but after a great deal of haggling (between family members! I suppose it’s a cultural thing) a compromise was reached and everybody walked away equally dissatisfied. 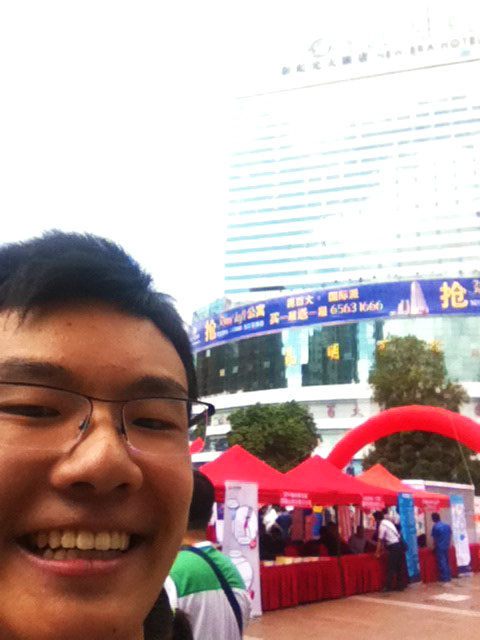 Author snapped selfie outside one of the large commercial shopping centers in Kunming, China.

Our last day, my father and I went shopping for gifts in the marketplace, spread out over the streets surrounding the modern shopping district. Small stands and petty vendors rule, peddling their wares at a tenth of the price that airports or malls charge; a jade bracelet there goes for fifty or so yuan, under ten U.S. dollars, while a jade bracelet in the airport was four hundred fifty yuan, about forty-five dollars. There are only five types of stands: trinket sellers (which sell jade everything, wooden carvings, and combs made of animal horn), engravers (who engrave a block of wood or jade with your name to be used in lieu of a signature), pet sellers (with a stock of puppies, kittens, birds, mice, turtles, and beetles), military surplus (like canteens with the party logo on their leather slings, binoculars, pocket knives, and entrenching tools), and smoke sellers (selling all kinds of fancy hookahs and huge pipes).

While there are Starbucks and McDonalds and KFCs and Pizza Huts in China, these stores only exist in very urban, modern places, where the richer or the more foreign are likely to go. Their prices actually run more or less the same as in the U.S., with a Big Mac meal costing 33 yuan, or about six dollars. A Starbucks tall cappuccino is 27 yuan, or $4.50. However, the Starbucks there is nowhere near as good as the Starbucks here; can those guys even call themselves baristas? The Big Mac is slightly yet noticeably larger and is called the “Grand” Big Mac. However, even that cannot compensate for the soggy, stale french fries. McDonalds is clever, though. In Kunming, where it is very hot and quite humid, the McDonalds in the shopping centers have a small cash counter opening directly onto the street that only sells ice cream, making it very easy to buy some cool treats after walking in the sun and on the scorching pavement.

Thus was my trip with my father to settle family matters in the Kunming a great adventure, at home and wandering the streets.